I know next to nothing about my very few Parisienne ancestors.  In fact, I have just one document that I have any ancestry in Paris at all.  Michel-Jacques Neveux dit Francoeur married Marguerite Brassard on the 12th of September, 1740, at the Basilica in Montreal, Quebec.  On their marriage record it indicates that he was the son of Jacques Neveaux and Franoise Bourgeoise of the parish of St. Gervais in the city of Paris.

It’s hard to say exactly what they did in St-Gervais, or exactly where they lived, but it’s likely from the record that they attended the church of St-Gervais-et-St-Protais in the Marais district just north of Notre Dame.  The current church, which was standing at the time that Michel-Jacques would have been born and when his parents would have married, was built in various stages between 1494 and 1657 – the last bit just being the current facade. 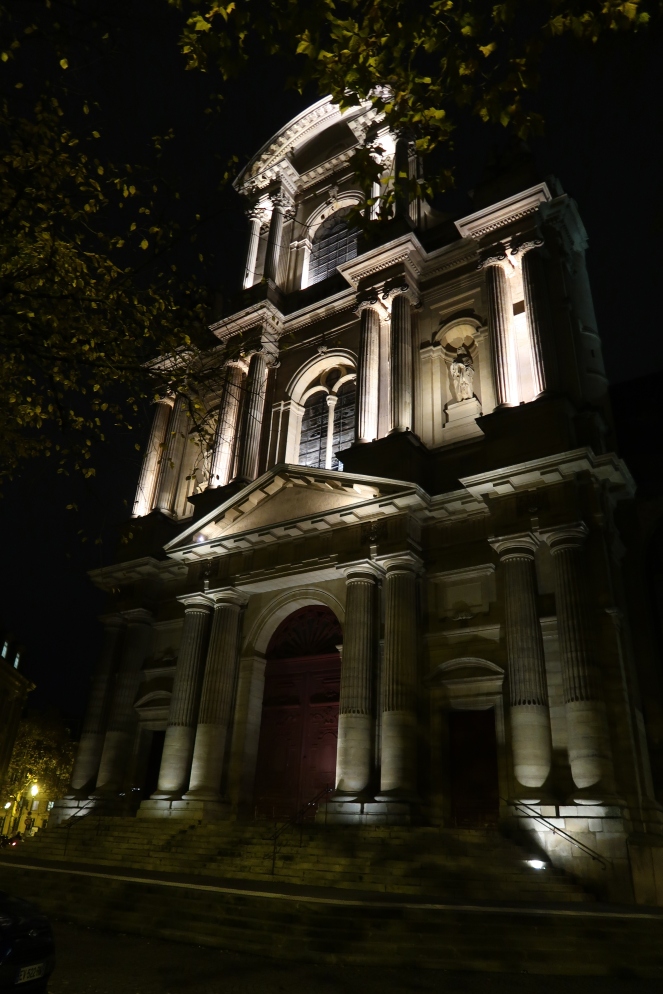 Tonight, along with my cousin Jenny, we walked by the church.  I knew I wouldn’t be able to go inside as it is part of a secluded monastic order and is only open to the public four days in the year.  I wasn’t aware of this prior to booking my trip, but the next time I go to Paris it will, hopefully (if I can manage it), fall on one of those days.

The district where the church was located was, in the early 18th century, a very fashionable part of Paris where only the rich and upper middle classes lived.  Also consider that the surname of Michel-Jacques mother is Bourgeois which, at the time that the name was created, would have only meant “City dweller”, or someone that lived within the walls of the city.  People who were able to live within the city walls were usually of the upper middle-class.  Non-royals who made fortunes in various industries of business and therefore had several privileges.  A person of this social class fits well with having lived in this part of the Marais.

Sadly, that is all that I know of this couple and their connection to Paris.  I think, for my last day here, that I may visit the National Archives, not at all far from here, to see if I can learn anything more from them.  Will keep you posted.

I had wanted to send more posts today on my day in the city but I’ve just do exhausted, barely keeping my eyes open, lol.